“Top Left” was about engaging those who identify as young men and boys (with the support and partnership of all genders of youth) in discussing, addressing, and taking action on issues related to gender-based violence. “Top Left” is happening in four communities across Turtle Island (aka: Canada), including here on Coast and Straits Salish Territories (Victoria). There were three main pieces of this project: A youth-driven event that was organized and delivered by young people in Victoria, the national Unite and Ignite Conference in March 2014, where some youth from Victoria involved in Top Left went to Ottawa to meet with Top Left youth from across the country, and local Community Action Projects throughout 2014 led by the Top Left team.

Rhizome youth and Project Respect adult staff will work together this summer to create a series of participatory workshops that youth-adult teams will facilitate with youth at Bayside Middle School and Pacific Secondary School. The workshops will address topics like gender-based violence, body image, consent & relationships, creating social change and much much more! Join us and have fun learning how to create and facilitate peer workshops – you get to help decide what is important for young people to learn when it comes to sexuality, relationships and sex!!!

Hollaback! Victoria, BC is an online space for people to share their stories of street harassment and join the movement to end street harassment backed by a network of activists around the world.  We work together to better understand street harassment, to ignite public conversations, and to develop innovative strategies to ensure equal access to public spaces. This year summer we are hoping to plan some events/fundraisers and think up some innovative ways to get out in the community. Ideas that have come up include guerilla theatre, sticker campaigns and chalk walks. Help us do this awesome work!

Check out HollaBack! Victoria (inactive as of 2022) and the article in Monday Magazine.

The Rhizome Youth Social Action Team participated in 3 days of discussions, theatre, art and more from August 6-8th in 2013 and August 7th-11th in 2012 . These free camps were offered to youth 12-21 of any gender. We explored topics such as homophobia, racism, colonialism, and sexualized violence. Youth to took control of their learning environment and were creative with how they wanted to engage the community on these issues. Youth learned to use different forms of multi-media such as film, dance, skillscreening, and spoken word poetry to create social action that addresses sexualized violence in the community. It was an amazing time for  for youth to share their perspectives, feel empowered, and have fun!

In February 2012, we engaged members of the community in writing subversive love letters that explore how love is linked to social justice and anti-violence. We wanted to show that Valentines day doesn’t have to just be a day for consumerist card buying and self hate on the part of those who are single. So we set up set up stations at coffee shops and on UVic campus early in February and asked people to write alternative love letters, and they did, over 200 letters were created. Two thousand copies of these letters were made and hidden by all over the city right before febuary 14th for people to find and enjoy.

You can see the letters on the project blog. This project was covered by the Times Colonist and Monday Magazine.

Over the 2011-2012 school year, we created a short film, called The Imperfection Project, exploring the silencing of young women’s experiences of sexuality and violence. Youth had fun story boarding, filming, acting and directing this film with the support of local non-profit media organization MediaNet and local filmmaker Kirk Schwartz. Overall, more than 25 young people from diverse contexts were involved in creating the vision for and producing this film. To complete the film, a smaller team of youth came together to write a powerful collective spoken word piece, excerpts from which form the soundtrack of the film.
In June 2012, we launched the film, as well as a showcase of all of the youth participant’s social actions at Solstice Café.  At the launch, the youth team and Project Respect facilitators also presented their collective spoken word piece, answered questions from the audience, and facilitated a World Café to engage the community in discussions about gender-based violence prevention. It was an evening of meaningful dialogue building long-lasting community connection.

Building on the success of the 2011/2012 Respect Revolution Campaign, in August 2012 we held a week-long day camp called Rhizome: Youth-led Social Action Camp to engage more young people living diverse realities to develop youth-led social actions that address gender-based sexualized violence in their communities. 16 youth ages 14 through 19 (3 of which were involved in the previous year’s social action projects took on facilitation roles) from across Greater Victoria came together for 5 days of theatre screen-printing, dance, body mapping and other mediums of exploration. On the fifth day of the camp, the youth put on a community share to engage 30 community members of all ages (from 5 to 65 years old) in using dance and theatre to better understand sexualized violence and how we can work together in community to prevent it.

This year, Project Respect partnered with the Inter-cultural Association of Greater Victoria, antidote: Multiracial and Indigenous Girls’ and Women’s Network, and Heart and Hands Health Collective to do a youth-led, community-based anti-violence mural project. Over four amazing months, this diverse team of youth explored how interlocking forms of violence are happening in our communities, looked at the root causes of this violence, and took action using street art as a way to resist violence and create inclusive space in downtown Victoria. Graffiti artists Remia Wong (Project Respect youth leader) and Cameron Kidd (community art facilitator) supported this youth team to create a bright, colourful, and inspiring mural on the side of Heart and Hands Health Collective on Cormorant Street as well as the wall of the adjacent building. 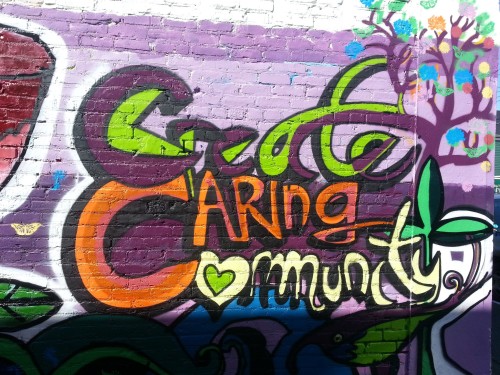 Project Reclaim (2018-2019) was a youth-driven, land-based project that engaged youth from the Tsartlip Nation to lead their community in healing from, resisting, and preventing violence through two key, interconnected program components: 1) youth-led land restoration to create greener, healthier community spaces, and 2) the youth-led development and delivery of culturally relevant violence prevention curricula in middle and high schools. Together, these program components worked to foster safer communities free from violence. Project Reclaim used a mentorship model, through which Tsartlip youth were supported by and learn from elders and community mentors. This intergenerational project was implemented by the hands of all willing community members of WSANEC nation (Tsartlip, Tseycum, Tsawout and Pauquachin). Through Project Reclaim, we worked to make public spaces in the Tsartlip community safer, healthier, and more accessible for all community members.